I don't know a lot about training dogs, but My Honey does.

He trains me, then I train her. Consistency is key, sometimes I make mistakes. We learn, we move on.

Cierra is an amazingly different dog than when we first brought her home.

I was looking at this photo taken yesterday... 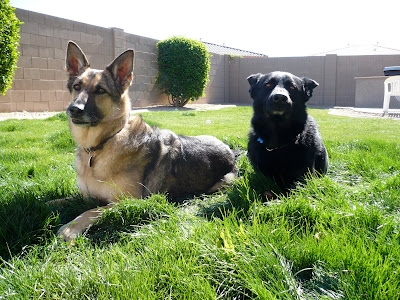 When this picture was taken several things were happening:
he was asked to "down",
he's expected to stay down until I tell him otherwise,
I bring Cierra in to the scene, I speak to her in German - one word: "platz". And down she goes.

Charge fears loud noises. I use the jets flying overhead to and from Luke Air Force Base as a dog training aid. They sound like freedom to me. God bless them.

Charge dislikes the camera. He can hear the neighbors dogs barking, the neighborhood children playing and the jets that roar overhead. The birds in the yard are a distraction. So many things are happening while he's asked to "down".

After the photo was taken he was released from the "down" and he received a TON of praise and petting and love.

The more training he receives and the more consistent his training is, his level of understanding increases, his confusion decreases, and his ears will be perfectly upright, just like Homegirl Cierra's ears are. 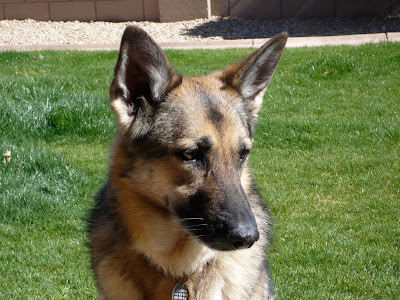 I have a deep love for the Doberman Pincher, but this girl ^ makes my soul sing with joy.

She had four homes in the first four years of her life. She faced being dumped at the dog pound but was saved by a rescue group. By the the grace of the Dog Gods, she became mine. How I love her.

And, soon, Charge will have his forever home too. I'm glad I could have him in my life for a little while.
Pawed & Scratched by Hundewanderer @ 1:00 PM